How The 2020 Election Is Still Being Investigated 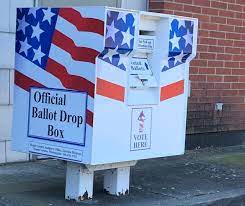 Some have forgotten the controversy surrounding the 2020 Presidential election, but many more have not. And for good reason. Every state has its issues and that includes Pennsylvania. One topic of controversy has been, and still is ballot dropbox’s.

A ballot dropbox is a receptacle where voters can return absentee/mail ballots in sealed and signed envelopes. The rules for these dropbox’s varies from state to state, but the primary goal is to deliver one ballot per individual. Depositing more than one ballot is considered a felony crime.

The reason this should concern every American, regardless of their political preference, is that the integrity of our ability to vote is our ability as an American citizen to have a say in our government. The more that we move away from an honest election that brings Americans together, the more that we risk losing the very thing that makes this nation special.

During the time leading up to the election, some States made legislative and unconstitutional changes to the voting laws, and then changed them back shortly afterward. To be more specific, ballot harvesting was illegal, then made legal during the election cycle, then made illegal again after the election. This was very suspicious.

Catherine Engelbrecht, founder of True the Vote, and Gregg Phillips have been leading efforts on investigating election integrity in America. True the Vote lays out specific details on Michigan, Wisconsin, Pennsylvania, Georgia, and Arizona elections, including whistleblowers willing to expose the entire scheme about ballot harvesting and more.  These details will be released in an upcoming documentary called ”2000 Mules”, hosted by Dinesh D’Souza. The term “mule” refers to a courier that is paid to transport and deliver an item. In this case, the courier would be transporting election ballots.

The documentary will break down the connected groups between progressive Non-Government Organizations (NGOs), radical activists, and the Democrat Party collaborating to change the outcome of the 2020 presidential election. The upcoming documentary will expose the strategy that was used for flipping key states in 2020. The investigation used cell phone tracking technology, and cross-referencing those results against dropbox camera footage. This evidence gave True the Vote the ability to document, case-by-case, at least 2,000 dropbox mules that accounted for hundreds of thousands of votes that represented election-changing votes.