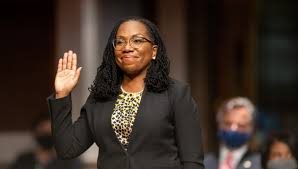 Ever since Justice Stephen Breyer announced his retirement, President Biden has conducted a rigorous search to try to find his replacement. He found a candidate with exceptional credentials, unimpeachable character, and unwavering dedication to the rule of law. Biden nominated Judge Ketanji Brown Jackson to serve as the next justice on the supreme court. Judge Jackson is the first black woman elected to the senate. She was confirmed to the supreme court with a vote of 53-47. Jackson has been a federal district court judge since March 2013, when she was nominated by President Barack Obama.  Carol Moseley Braun believes that Jackson will not be holding back in terms of trying to influence her other colleagues on the court. She believes she will bring a new perspective to judicial opinions and that it could even help her to influence her colleagues.