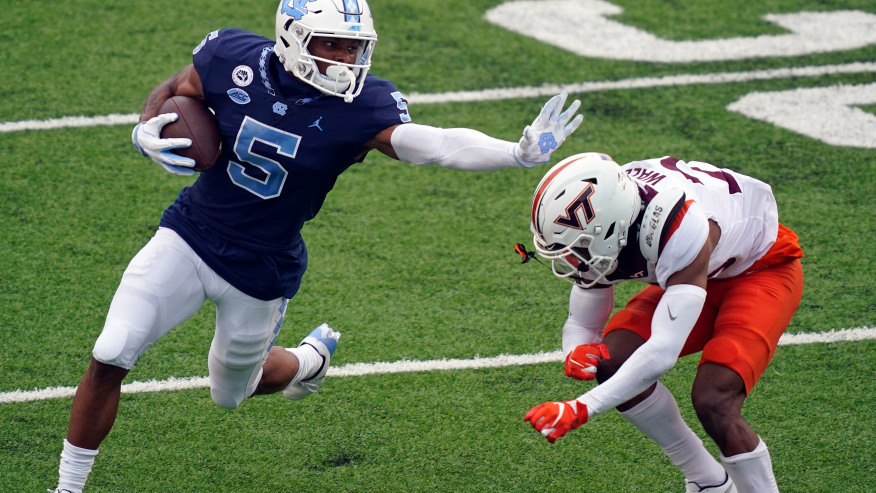 For this week’s under the radar draft profile, we will be featuring University of North Carolina wide receiver Dazz Newsome.

Newsome is a smaller receiver, standing at only 5 feet 11 inches tall and 190 lbs (ESPN.com). Despite that, Newsome has incredible speed and catches almost everything thrown his way. In a high-powered UNC offense that averaged 33.1 points per game in 2019 (Sports-Reference.com), Newsome was able to provide 10 touchdowns and 1,018 yards. His elusiveness, tackle shedding ability, and overall strength helped Newsome eclipse those totals and lift UNC to a 7-6 season in 2019 and an 8-4 season in 2020.

With many teams like the New York Jets, New England Patriots, Las Vegas Raiders, and Baltimore Ravens struggling to draft productive receivers as of late, Newsome could easily change the franchises’ narratives. The impossible-to-bring-down receiver will easily leave his mark in the NFL.

Projected as a mid fourth to fifth round draft pick, Newsome could easily be picked before that after the NFL combine and offseason workouts.

With many talented receivers in the 2021 NFL draft class, it is very possible that Newsome could still have a solid career, but still not be labeled as one of the better receivers in the draft. With lots of hype around those other receivers, that leaves room for Newsome to continue to succeed in football, even without lots of talk around his name.

If a team chooses to take a shot on Newsome and helps develop him to be even faster and run even sharper routes, Newsome could easily go down as one of the biggest steals of the 2021 draft.